*ALL PRICES ARE BASED ON COLOR STABLE WINDOW FILM WITH A LIFE TIME WARRANTY.

Pricing and installation depends on a couple different factors, The type of window film you would like installed, and is there any old  window  film to remove prior to a new install.

is just that! The film is dyed in the color of a charcoal or black as most people see it. There is no Metalliac, Carbon, or Ceramic properties added to the film to enhance in protection or life, such as, metalliac, carbon, or ceramic. This process is completed during manufacturing, also referred to as impregnating the window film. Dyed Window Film generally has the least amount of life spam, generally one to two years. There is an exception, LLumar, Huper Optics, and Suntek manufacture a "color stable" dyed film which is guaranteed for life, however; cost as much as SunTek's Carbon film. Please keep in mind, because the films are made with Metalliac, Carbon, or Ceramic. The appearance does not change. They look the same side by side. So, be sure your installer provides you with GENUINE FACTORY WARRANTY CARDS.

Is actually made with tiny metalliac flakes that assist in the refraction of harmful UV rays and heat. this film is very good, however; there is some controversy over the metal causing interference with signals from radio and cell phone devices. This Product carries a life time warranty and is very durable.

Much like metalliac and ceramic, Carbon bumps up the heat and UV rejection Factor due to it's Carbon material used for the protection. This film is still very popular because of it's cost over ceramic, and is generally the area most customers flock to.

Ceramic Film comes with a cost, but has the most hear rejection, UV-1 and UV-B protection available today. Ceramic film does not fade and is the most durable film available. I currently have clients with vehicles 8 years old, and the Ceramic Film looks as new as the day it was installed. See the video on Ceramic film and how it reduces the rick of skin Cancer at the bottom of the page. 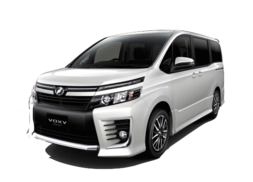 Thank you for contacting us! If needed, you will hear back from us by the end of the business day. 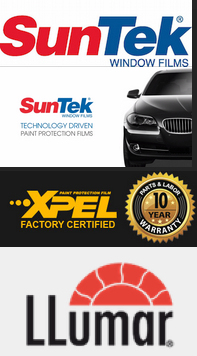 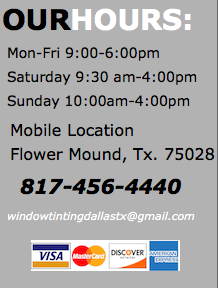